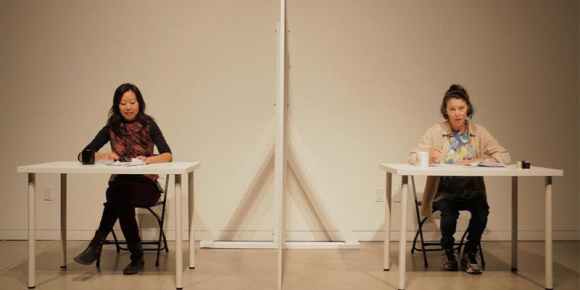 I have been invited to be a panelist for a discussion titled, “Making Art in the Age of #45” as a part of public programming at Kala Institute. Bay Area-based artist Christy Chan invited me and I am constantly humbled and honored for these opportunities. In 2015, I wrote a review of Christy Chan’s performance for online art publication Art Practical. She will re-enact The Long Distance Call at New Normal / Old Normal – a performance and panel discussion. Tickets can be purchased for the event here.

Information for the performance and panel discussion appear below:

Performance starts at 7pm, Doors open at 6:30pm
Panel Discussions at 7:45pm or 10 min after the performance ends.

Kala Art Institute is excited to present New Normal / Old Normal, a performance and panel discussion on Thursday, September 6 at 7pm. Artist Christy Chan will present a re-staging of her performance The Long Distance Call followed by the panel discussion Making Art in the Age of #45.

Expanding on her own personal experiences and interactions with KKK members during her childhood growing up in rural Virginia, Chan presents The Long Distance Call, a re-enactment of phone calls between Chan and Miss. Anne, a KKK seamstress in Alabama. During the phone calls Chan convinced Miss. Anne to provide her with a custom-made Klan robe for her video work. Their unsettling yet banal phone calls tell the story of an unexpected interaction between two women, from trust gained to the eventual abrupt end of their communications. The Long Distance Call is performed by Catherine Lerza and Christy Chan.

The original phone calls took place in 2013 and the re-enactment was first performed in San Francisco at Southern Exposure in 2015, two years before the Trump administration took office and the KKK and extreme right became politically emboldened for the first time since the 1970’s.

Following The Long Distance Call, Kala will present Making art in the age of #45, a panel discussion with Ryanaustin Dennis (founder, co-director of The Black Aesthetic), Guillermo Galindo (composer, sonic architect, performance and visual artist), Christy Chan (artist), Favianna Rodriguez (artist) and Dorothy Santos (writer, editor, and curator). Panelists will explore how the role of the arts and artists working in race, class and political issues has evolved since Trump’s inauguration. The panel moderator is Bay Area comedian Dhaya Lakshminarayanan, winner of the Liz Carpenter award for political humor (previously awarded to Samantha Bee) and hosts The Moth in San Francisco.

Dorothy R. Santos (b. 1978) is a Filipina American writer, artist, and educator whose academic and research interests include feminist media histories, critical medical anthropology, technology, race, and ethics. She is a Ph.D. student in Film and Digital Media at the University of California, Santa Cruz as a Eugene V. Cota-Robles fellow. She received her Master’s degree in Visual and Critical Studies at the California College of the Arts and holds Bachelor’s degrees in Philosophy and Psychology from the University of San Francisco. Her work as been exhibited at Ars Electronica, Fort Mason Center for Arts & Culture, Yerba Buena Center for the Arts, and the GLBT Historical Society.

Her writing appears in art21, Art in America, Ars Technica, Hyperallergic, Rhizome, Vice Motherboard, and SF MOMA’s Open Space. Her essay “Materiality to Machines: Manufacturing the Organic and Hypotheses for Future Imaginings,” was published in The Routledge Companion to Biology in Art and Architecture. She is a co-founder of REFRESH, a politically-engaged art and curatorial collective and serves as the Executive Director for the Processing Foundation.